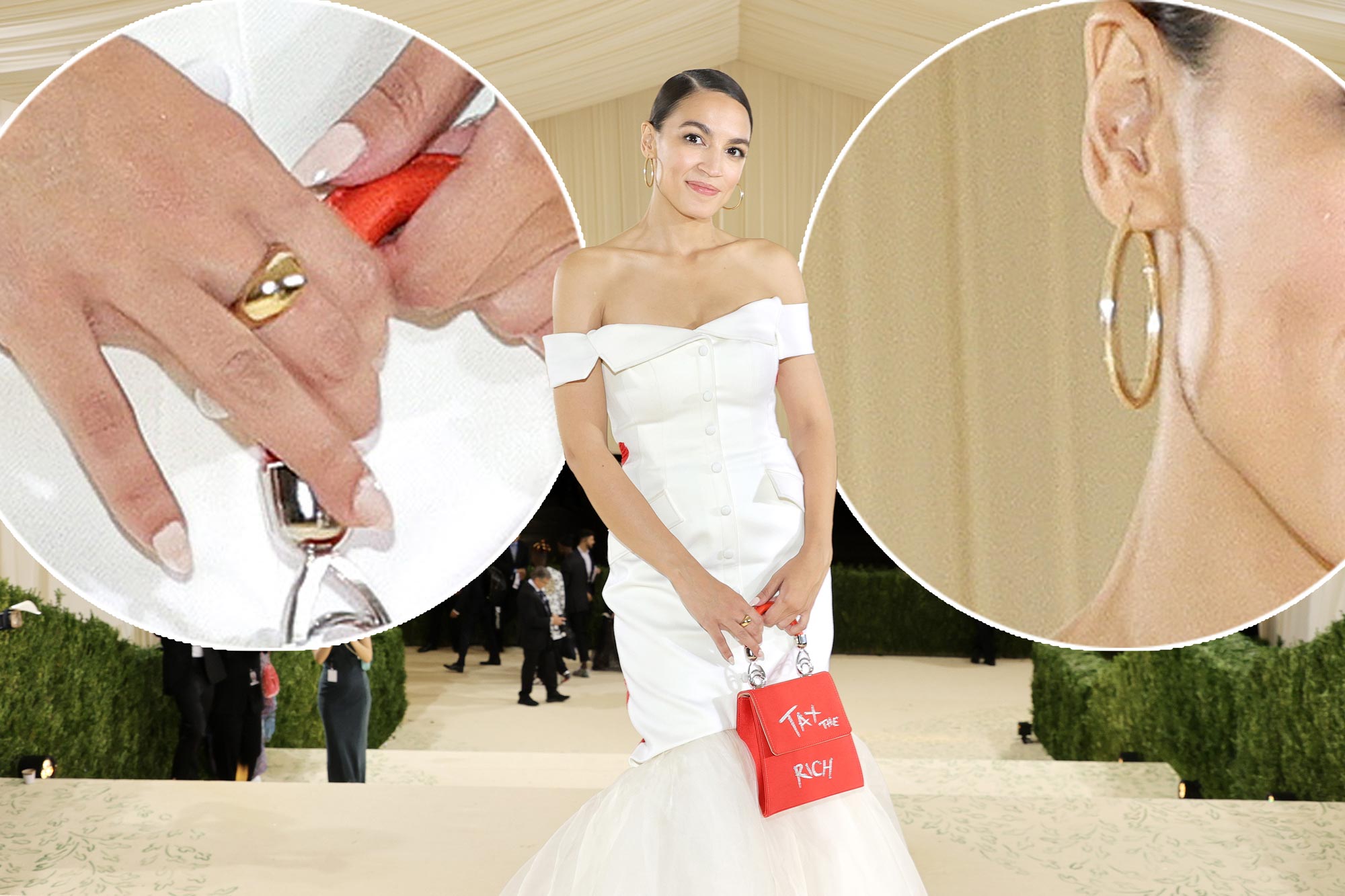 Rep. Alexandria Ocasio-Cortez is getting into the celebrity gifting game — she got free jewelry to wear at the Met Gala with her “Tax The Rich” dress.

While her earrings are certainly less expensive than many of the other jewels loaned out to Met Gala celebs — such as Hailey Bieber’s Tiffany & Co. Blue Book diamond necklace — they are still worth more than the $300 weekly federal unemployment benefit that expired on Sept. 6.

A press release was sent out by Mejuri on Monday night, which read, “Alexandria Ocasio-Cortez wore multiple pieces from the leading fine jewelry brand Mejuri to the 2021 Met Gala: In America: A Lexicon Of Fashion. Alexandria wears the Large Tube Hoops and Dome Ring.“

AOC showed up at the bash with Aurora James, the founder of fashion line Brother Vellies, who masterminded her dress that declared, in red letters, “Tax the Rich,” which was ironic considering that tickets to the event cost $35,000 each.

She said she wanted to “enjoy” herself while also making a statement.

When reached by The Post, a rep for jewelry firm Mejuri confirmed to The Post that AOC’s baubles were “samples,” items that are given to celebs and influencers to wear to promote a brand.

The Mejuri rep said, “The samples were sent to Aurora James, Founder of Brother Vellies who Alexandria Ocasio-Cortez attended with.”

Ocasio-Cortez claimed on social media that it was her “responsibility” to attend the Met Gala — as she was blasted for wearing the couture “Tax the Rich” dress to the elite bash.

She justified wearing her dress by New York-based James — whom she has hailed as a “sustainably focused, Black woman immigrant designer who went from starting her dream….at a flea market in Brooklyn to winning @cfda against all odds” — by saying they were there to “kick open the doors at the Met.”

“And before haters get wild flying off the handle, New York elected officials are routinely invited to and attend the Met due to our responsibilities in overseeing and supporting the city’s cultural institutions for the public,” she said on Instagram. “I was one of several in attendance in this evening.” Mayor Bill de Blasio also attended with his wife, Chirlane McCray.

She added the dress was “borrowed” from Brother Vellies, even though it appears to have been made bespoke for her.

James had also posted on Instagram, “Working with @aoc to create this dress and this message at this particular moment in time was incredibly important….we can never get too comfortable in our seats at the table once they’ve been given.”

AOC’s rep didn’t get back to us.