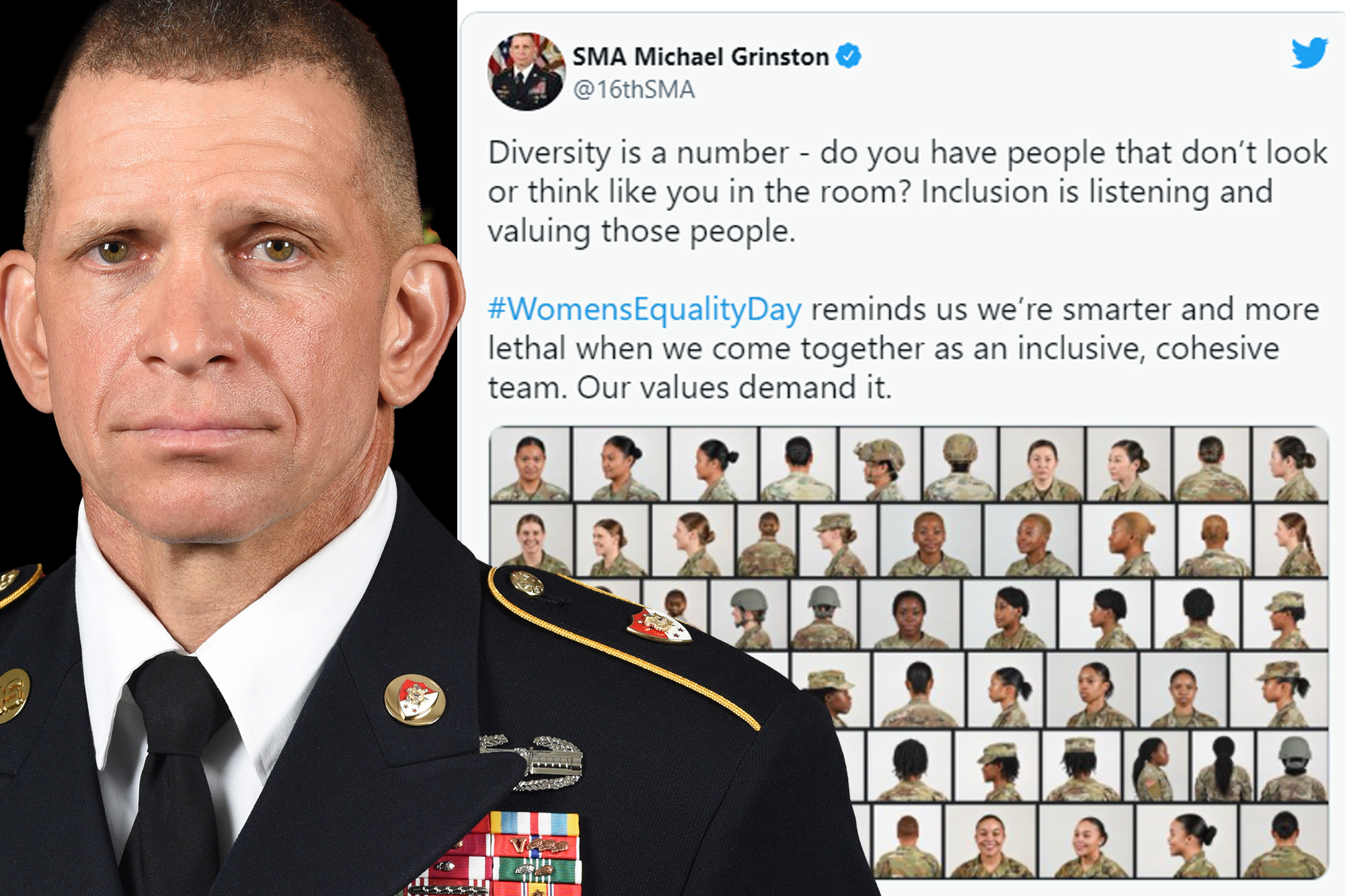 The top enlisted member of the US Army has been slammed for a tweet in which he highlighted diversity in the ranks on Women’s Equality Day — shortly before the twin suicide attacks that killed 13 American troops and at least 95 Afghans in Kabul.

“Diversity is a number – do you have people that don’t look or think like you in the room? Inclusion is listening and valuing those people,” Sergeant Major of the Army Michael Grinston said in a tweet.

“[Women’s Equality Day] reminds us we’re smarter and more lethal when we come together as an inclusive, cohesive team. Our values demand it,” the Army’s most senior noncommissioned officer added.

Attached to the message was an image containing uniformed women of various races from all angles.

Grinston, 53, serves as the “Army chief of staff’s personal adviser on matters affecting the enlisted force,” devoting “the majority of his time traveling throughout the Army to observe training and interact with Soldiers and their Families,” according to his military bio.

The Alabama native and former artilleryman faced a barrage of criticism for what social media users called a tone-deaf message on a tragic day – even though he tweeted his remarks before the bombings.

“WTFO?!? Why don’t you shut your leftist boot mouth and go switch places with the Marines and Sailors standing post where the 13 warriors were killed today. You are the epitome of worthless leadership,” he wrote.

“The Red American blood shed by the 12 Marines and Navy Medic today in #Afghanistan is the only color that matters in our military! Not skin pigment, not sexuality, not gender. Red American blood!” Gilliam added.

“This is where your mind is today bro?” another user, @Cernovich, said in a tweet.

“This I why I fear for our nation. On a day such as this, the SMA feels it is important to let us know how ‘woke’ the Army is,” @GerryUSMC wrote.

“Only after the travesty of this was pointed out did you respond about today’s events. As a retired Marine Officer I am simply shocked,” he added.

“Why would you even consider posting this at a time like this? Yes, I know you posted it before the attack, but our military should be 100% focused on evacuating US citizens from Afghanistan and ensuring the safety of Americans everywhere. This ‘woke’ $h!t doesnt matter right now!” added @MRoffal.

Yet another user said, “How diverse were the victims of the explosion at the airport in Kabul?”

But not everyone had harsh words for the soldier.

“In his defense, the @16thSMA tweeted this almost an hour before the attack. Everyone is quick to point fingers at him, but let’s not denegrade [sic] his service,” @STUARTM75679013 wrote.

“A recipient of not one, but two Bronze stars, with V Device. We owe him a debt of gratitude not ridicule for his service!” he added.