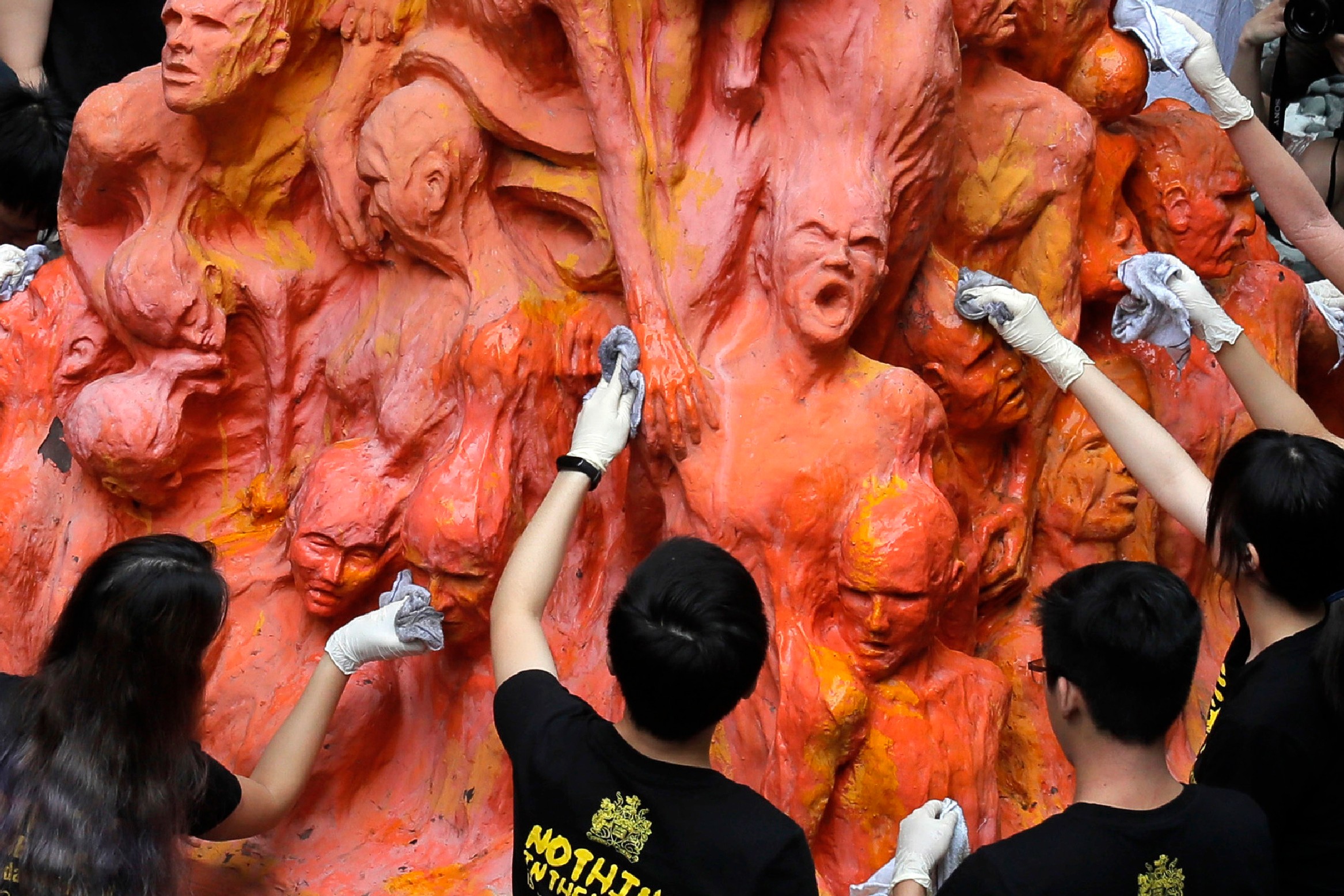 HONG KONG — For Hong Kong’s pro-democracy movement, 2021 has been a year in which the city’s authorities and the central government in Beijing stamped out nearly everything it had stood for.

Activists have fled abroad or been locked up under a draconian new National Security Law imposed on the city. Opposition voices have been driven out of the legislature. Monuments commemorating China’s crackdown on pro-democracy protesters in Beijing in 1989 have been taken down. And as the year neared its end Wednesday, a vocal pro-democracy media outlet closed following a police raid, silencing one of the last openly critical voices in the city.

The crackdown, which took root 18 months ago with the enactment of the National Security Law, played out this year as the world’s two major powers, the United States and China, battled over democracy and good governance.

The Biden administration has been sharply critical of China’s moves in Hong Kong as it tries to support democracy globally and deepen ties with other democracies in the face of China’s rise. China, ruled by the Communist Party, has pointed out flaws in American democracy and argued that its own system has delivered both stability and a better response to COVID-19 compared to what it describes as chaos in the United States.

Hong Kong, a former British colony that was seen as a bastion of freedom after its return to China in 1997, has gone through an overhaul of its political system and a crackdown on political dissent as Beijing and Hong Kong authorities sought to suppress anti-government sentiment that led to months of political strife in 2019.

The outlet announced Wednesday afternoon that it would halt operations following the raid.

Stand News is the second media outlet in Hong Kong to cease operations after being targeted by authorities, following the now-defunct Apple Daily newspaper which shut down earlier this year after authorities raided its offices for a second time and froze millions in assets.

A string of arrests of activists and election law amendments this year have all but quashed the pro-democracy movement in the city.

More than 100 pro-democracy figures and others have been arrested under the National Security Law, which penalizes actions seen as separatist or subverting the Hong Kong or Chinese governments.

That includes 47 people charged with subversion under the new law in February over their roles in an unofficial primary election held in 2020 to determine the best candidates to field in planned legislative elections.

Authorities accused the activists of subversion, saying they planned to win a majority and use it to paralyze the government and eventually force Hong Kong leader Carrie Lam to step down.

The government postponed the 2020 elections, citing public health risks from COVID-19. Then, the central government in Beijing announced new election laws earlier this year that reduced the proportion of directly elected seats to less than a quarter and required all candidates to be loyal to Beijing.

The results were predictable: Earlier this month, pro-Beijing lawmakers won a landslide victory in the postponed polls. The city’s largest opposition party, the Democratic Party, fielded no candidates for the first time since Hong Kong’s 1997 handover to China.

Several pro-democracy trade unions and organizations have also been dissolved this year. The city’s largest teachers’ union disbanded in August due to the political climate, followed later by the city’s largest independent trade union, reducing the space for civil society groups.

The Civil Human Rights Front, a pro-democracy group that organized some of the biggest protests in 2019, also disbanded following a police investigation under the National Security law.

As the year drew to a close, several artworks were removed that commemorated the Tiananmen massacre.

China’s Communist Party has long sought to erase Tiananmen from the public consciousness in the mainland, forbidding any commemorative events. Now it seems determined to do the same in Hong Kong in the name of restoring stability to the city.