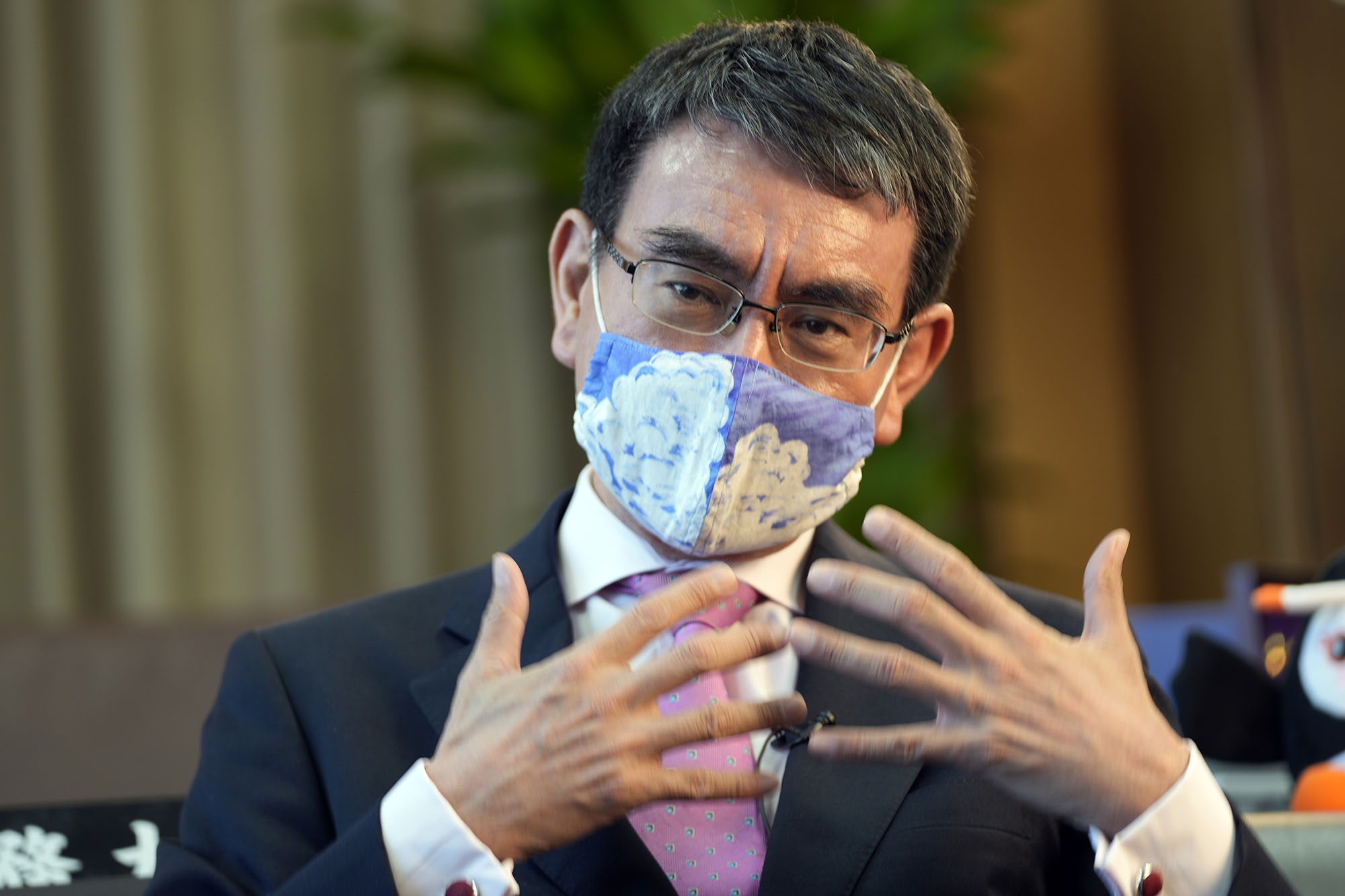 TOKYO — As Olympics host Tokyo saw another record number of coronavirus cases Wednesday, Japan’s vaccination minister said the speed of the country’s inoculation campaign is less urgent than getting shots to young adults, whom some health experts are blaming for the current surge in infections.

Taro Kono told The Associated Press that Japan is “overshooting” its goal of a million shots a day, so “speed doesn’t matter anymore.” He said Japan is averaging about 10 million shots a week after a late start that critics have blamed on extra red tape.

“Even if we slow down a little bit, I’m OK. Rather, we need to reach out to the younger people, so that they would feel that it’s necessary for them to get vaccinated,” Kono said during an interview in his office. “If we could vaccinate (those in their) 20s or people in (their) 30s for 80 percent or higher, it would be a good number for me.”

He said officials will turn to the internet to get the message out to young adults and work to combat vaccine misinformation. Young adults are now eligible for vaccinations under Japan’s largely age-based immunization system, but many are not eager.

Tokyo reported 3,177 new coronavirus cases Wednesday, an all-time high for the city and the first time it exceeded 3,000 infections in a day. The new cases bring the total for the Japanese capital to 206,745 since the pandemic began.

Tokyo is under its fourth state of emergency, which will last through the Olympics and stop two days before the Paralympics begin Aug. 24. Experts had earlier warned that the more contagious delta variant could cause a surge during the Olympics, which started Friday.

Some scientists have questioned holding the Tokyo Games at all and there is widespread public opposition to them. Many fear that the tens of thousands of visitors will make the virus situation worse.

Kono said he was confident that a “bubble” is keeping Olympic visitors away from regular Japanese citizens, reducing the risk of more cases. He also said he didn’t think the Games would create a “Tokyo variant” of the virus that could spread around the globe.

“We’re not really worried about that issue,” Kono said.

The International Olympic Committee says more than 80 percent of athletes and staff staying in the Olympic Village have been vaccinated — and they are expected to remain largely in the locked-down athletes’ village and venues. Still, the bubble is based more on the honor system than official enforcement.

Vaccination rates are not clear for other participants coming from abroad, many of whom are staying in Tokyo hotels and experts warn that even strict rules won’t prevent people from mingling, especially among non-athletes.

“There’s a limit to the bubble,” with reporters and other people going in and out, said Dr. Kazuhiro Tateda, a Toho University infectious diseases expert who is on a government COVID-19 panel.

While Japan has so far kept its cases and deaths lower than many other countries, its vaccination campaign started with health care workers only in mid-February, behind many other large economies. Japan required additional clinical testing for the vaccines, a time-consuming step that many experts called medically meaningless.

Kono said Parliament demanded the additional tests and that there’s a long history of people suing the government over vaccination campaigns.

“Now we’ve learned a lesson, so if there’s going to be another pandemic, I think we would do it a different way, for sure,” Kono said.

Health experts have noted that cases among younger, unvaccinated people are rising sharply. While about two-thirds of Wednesday’s cases were people in their 30s or below, those in their 40s and 50s now dominate Tokyo’s nearly 3,000 hospitalized patients and are gradually filling up available beds.

Dr. Ryuji Wakita, director general of the National Institute of Infections Diseases and head of a government advisory board, said vaccination progress has been limited mostly to elderly people.

Wakita acknowledged that the rise of serious cases is modest compared to the sharp increase of daily cases, but even so, the ongoing surge could cause younger and unvaccinated patients to develop serious cases while being left untreated.

Inoculations for the elderly started in mid-April, but were slowed by initial supply shortages, cumbersome reservation procedures and a lack of medical workers to give shots. The pace then picked up in mid-May when imports stabilized and more staff to give the shots was secured.

Despite Kono’s comments on the speed of inoculations, there are still worries about the vaccination pace.

Workplace inoculations began in mid-June, with thousands of companies applying for a chance to vaccinate employees. But the government then indefinitely stopped taking such applications because of tight vaccine supplies and vaccinations at about half of 5,000 worksite locations have been on hold.

Vaccine distributions from the central government to municipalities also declined, from 18.7 million doses in June to 12 million doses for July-August, forcing towns across the country to postpone or suspend vaccination reservations.

Japan had received about 100 million COVID-19 vaccine doses by June and an additional 70 million shots are expected between July and September. Prime Minister Yoshihide Suga has tried to accelerate the delivery of vaccines, including in a meeting with the CEO of Pfizer.

Suga is under increasing pressure and his political future may be tied in part to an Olympics that are perceived as successful. There’s also the geopolitical competition with rival Beijing, the next Olympics host, to make sure the Games go off without major calamity.

Asked about the political considerations of going through with the Tokyo Games, Kono said: “I think it’s irrelevant.”