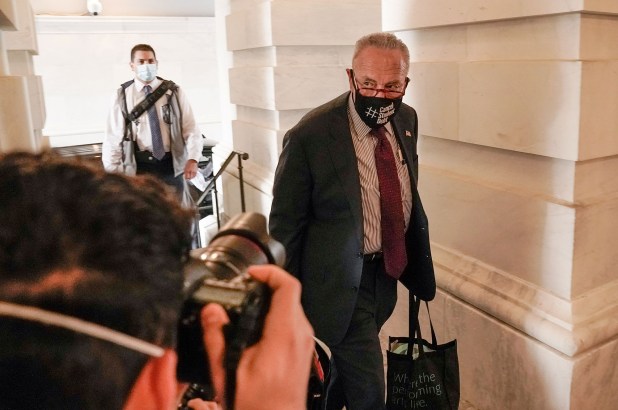 Senate Majority Leader Chuck Schumer, (D-NY), enters the US Capitol as Republican and Democratic leaders continue to work on an amendment to the bipartisan infrastructure bill on Aug. 7, 2021.
REUTERS/Ken Cedeno

The 67 – 23 vote to invoke cloture beat back GOP efforts to filibuster the bill. A total of 18 Republicans voted with every Democrat to advance the bipartisan measure.

The vote takes the bill one step closer to final passage which could come as early as Saturday afternoon. Among the Republicans voting in favor to advance the bill was Senate GOP leader Mitch McConnell.

“Republicans and Democrats have radically different visions these days, but both those visions include physical infrastructure that works for all of our citizens,” he said in remarks just before the cloture vote.

The bill now proceeds into an amendment process, which the Republican leader warned needed to be thorough.

“There are many outstanding amendments that are important that would improve the legislation, and deserve votes before the Senate is asked to vote on final passage of the bill,” McConnell said.

President Biden sounded a note of urgency in advance of the Saturday vote, saying in a tweet that the deal was “a historic, once-in-a-generation investment in our nation’s infrastructure” and that “It will create good-paying, union jobs repairing our roads and bridges, replacing lead pipes, and building energy transmission lines.”